I had a short but interesting exchange with a student in physics—one of the very few who actually reads (some of) the stuff on this and my other blog (the latter is more technical than this one).

It was an exchange on the double-slit experiment with electrons—one of these experiments which is supposed to prove that classical concepts and electromagnetic theory fail when analyzing the smallest of small things and that only an analysis in terms of those weird probability amplitudes can explain what might or might not be going on.

Plain rubbish, of course. I asked him to carefully look at the pattern of blobs when only one of the slits is open, which are shown in the top and bottom illustrations below respectively (the inset (top-left) shows how the mask moves over the slits—covering both, one or none of the two slits respectively).

Of course, you see interference when both slits are open (all of the stuff in the middle above). However, I find it much more interesting to see there is interference too (or diffraction—my preferred term for an interference pattern when there is only one slit or one hole) even if only one of the slits is open. In fact, the interference pattern when two slits are open, is just the pattern one gets from the superposition of the diffraction pattern for the two slits respectively. Hence, an analysis in terms of probability amplitudes associated with this or that path—the usual thing: add the amplitudes and then take the absolute square to get the probabilities—is pretty nonsensical. The tough question physicists need to answer is not how interference can be explained, but this: how do we explain the diffraction pattern when electrons go through one slit only?

I realize you may be as brainwashed as the bright young student who contacted me: he did not see it at first! You should, therefore, probably have another look at the illustrations above too: there are brighter and darker spots when one slit is open too, especially on the sides—a bit further away from the center.

[Just do it before you read on: look, once more, at the illustration above before you look at the next.]

The diffraction pattern (when only one slit is open) resembles that of light going through a circular aperture (think of light going through a simple pinhole), which is shown below: it is known as the Airy disk or the Airy pattern. [I should, of course, mention the source of my illustrations: the one above (on electron interference) comes from the article on the 2012 Nebraska-Lincoln experiment, while the ones below come from the articles on the Airy disk and the (angular) resolution of a microscope in Wikipedia respectively. I no longer refer to Feynman’s Lectures or related material because of an attack by the dark force.] 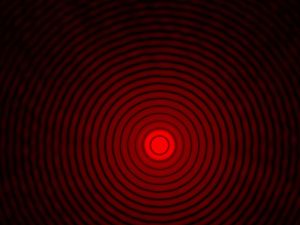 When we combine two pinholes and move them further or closer to each other, we get what is shown below: a superposition of the two diffraction patterns. The patterns in that double-slit experiment with electrons look what you would get using slits instead of pinholes.

It obviously led to a bit of an Aha-Erlebnis for the student who bothered to write and ask. I told him a mathematical analysis using classical wave equations would not be easy, but that it should be possible. Unfortunately, mainstream physicists − academic teachers and professors, in particular – seem to prefer the nonsensical but easier analysis in terms of probability amplitudes. I guess they only see what they want to see.

Note: For those who would want to dig a bit further, I could refer to them to a September 20, 2014 post as well as a successor post to that on diffraction and interference of EM waves (plain ‘light’, in other words). The dark force did some damage to both, but they are still very readable. In fact, the fact that one or two illustrations and formulas have been removed there will force you to think for yourself, so it is all good. 🙂